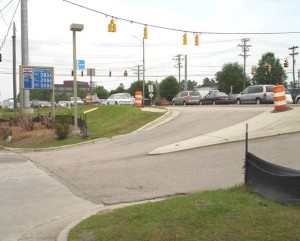 This condemnation by the NCDOT involved the closing and/or change in grade to access points for this Durham convenience store. After the taking the C-Store and gas pumps remained but the impact to the site was significant. NCDOT deposited $14,959. Ms. Haywood together with her co-counsel obtained a jury verdict of $995,000. The NCDOT appealed and the case settled at the Court of Appeals level for $950,000.

“We have been clients of Emmett’s for many years. She has been a great person to work with, both professionally and personally. We always know that she will give it her all and will take care of our needs.”
– Andy, real estate developer * Disclaimer